‘Lipopo ya ba Nganga’ is another magic Congolese production from the Souvenirs from the Congo 2LP. The song captured me, as it was different from what I was hearing in most Kalle-compositions. Lyric-wise, this is one of Kabasele’s strongest efforts. 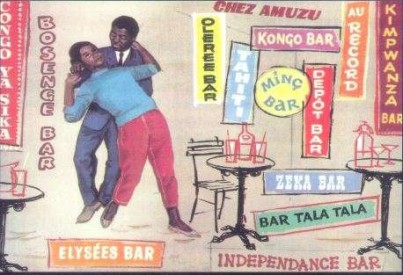 In the sixties, after the independence, Joseph Kabasele composed a song that captured the zeitgeist of post-colonial Kinshasa (Léopoldville). The title of the chant, ‘Lipopo ya ba nganga, means loosely translated ‘The magic of Kinshasa’. Kalle describes the fixation on escapism, instant gratification and consumption in urban life. It now can be interpreted as a social commentary against the hedonistic way of life in former Léoville. The translation of the last line* sums it up rightly: a single city, yet many names: Kini Malebo, Lipopo, Léoville…

The picture with the weird dancing couple shown above is the standard front cover of the Série des nouveautés, a series of 45 rpm ep’s on the legendary Congolese label Ngoma. It gives a glance of the first popular bars in Kinshasa during the vibrant fifties. Orchestras from the likes of Kabasele’s African Jazz, Franco’s OK Jazz or Rock-A-Mambo were performing in those bars. The pictures below are snapshots of the nightlife in Kin La Belle – another Kinshasa nickname – during the 1950s and 1960s. When the modern world became more accessible to Congolese people, albeit the wealthy ones. They are all made by Jean Depara, an Angolan photographer who moved to the Congo in the early fifties. 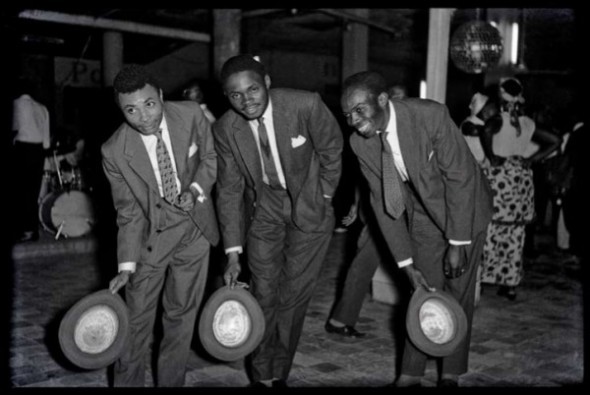 Sonic artifacts from the 78 rpm era